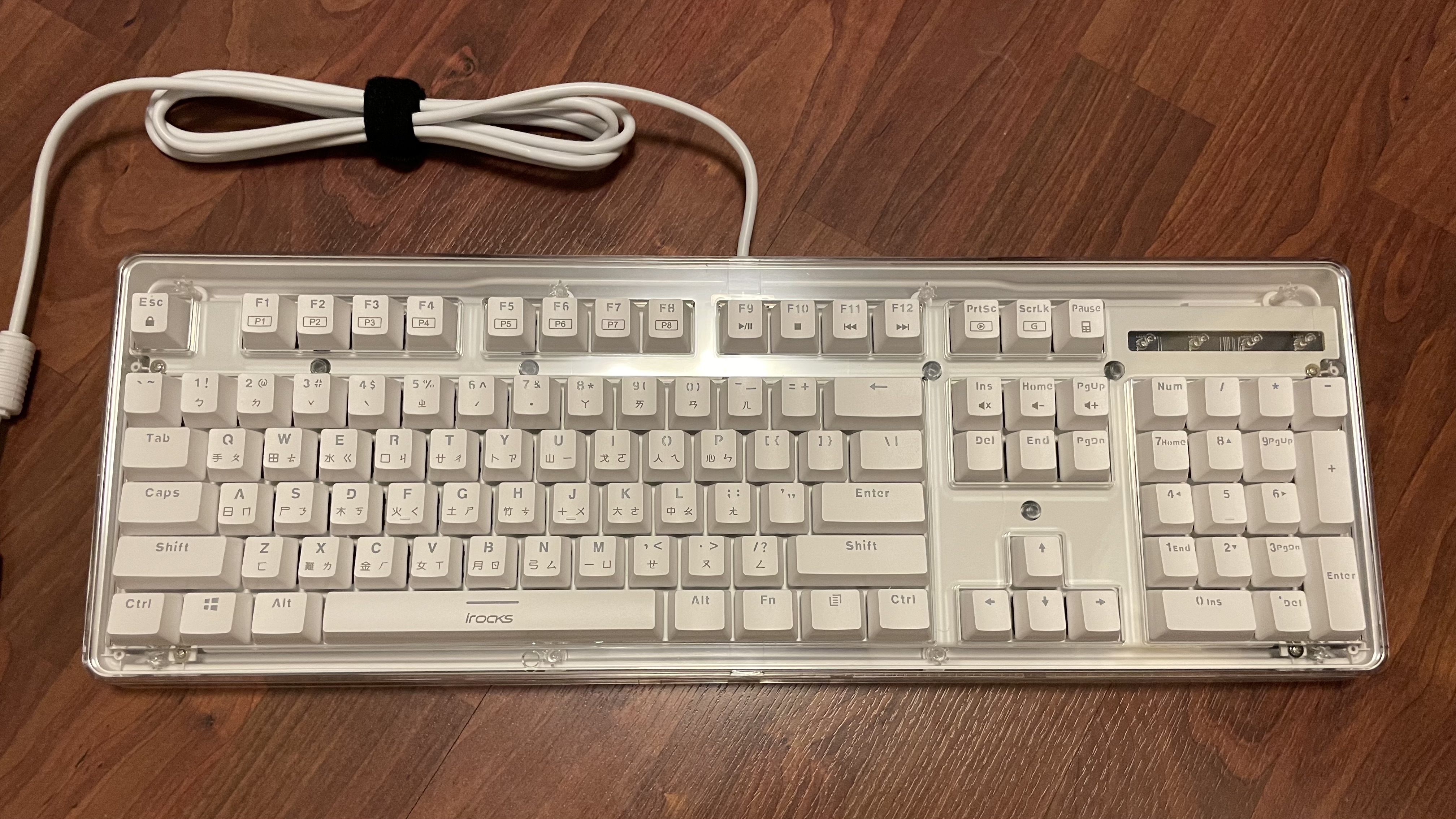 Today, a peculiar keyboard that also comes from the Guang Hua electronics district. This time, an i-Rocks keyboard with their own switch, designed in collaboration with alps.tw! An Alps-like switch with an MX mount, it sets the expectation of an Alps-ish feel with MX keycaps. 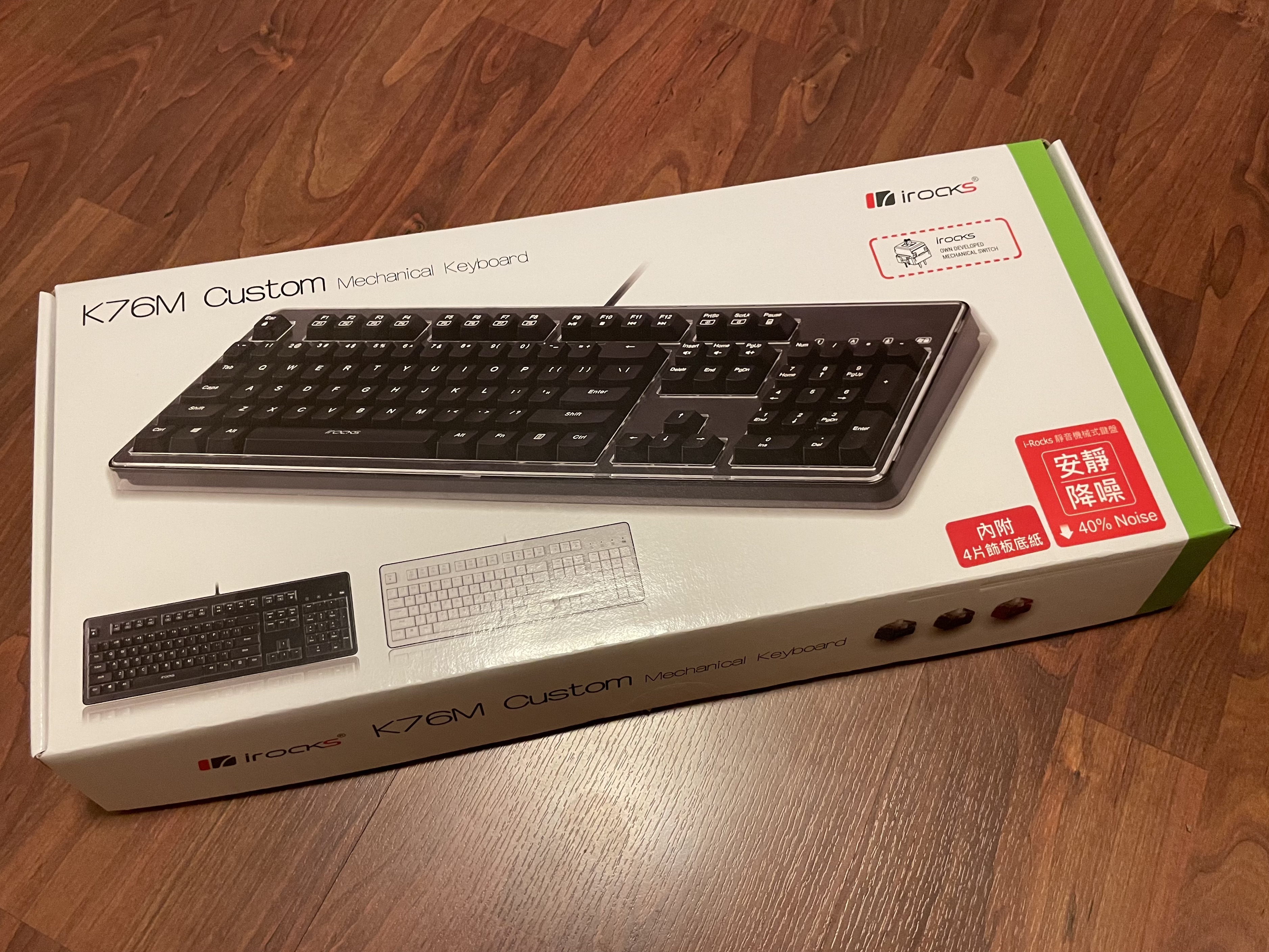 The box is nothing special, just normal packing with cardboard and foam sheet padding. There is a manual and 4 sheets for customizing the look (I'll get to that). i-Rocks also has a template for cutting plotters here. 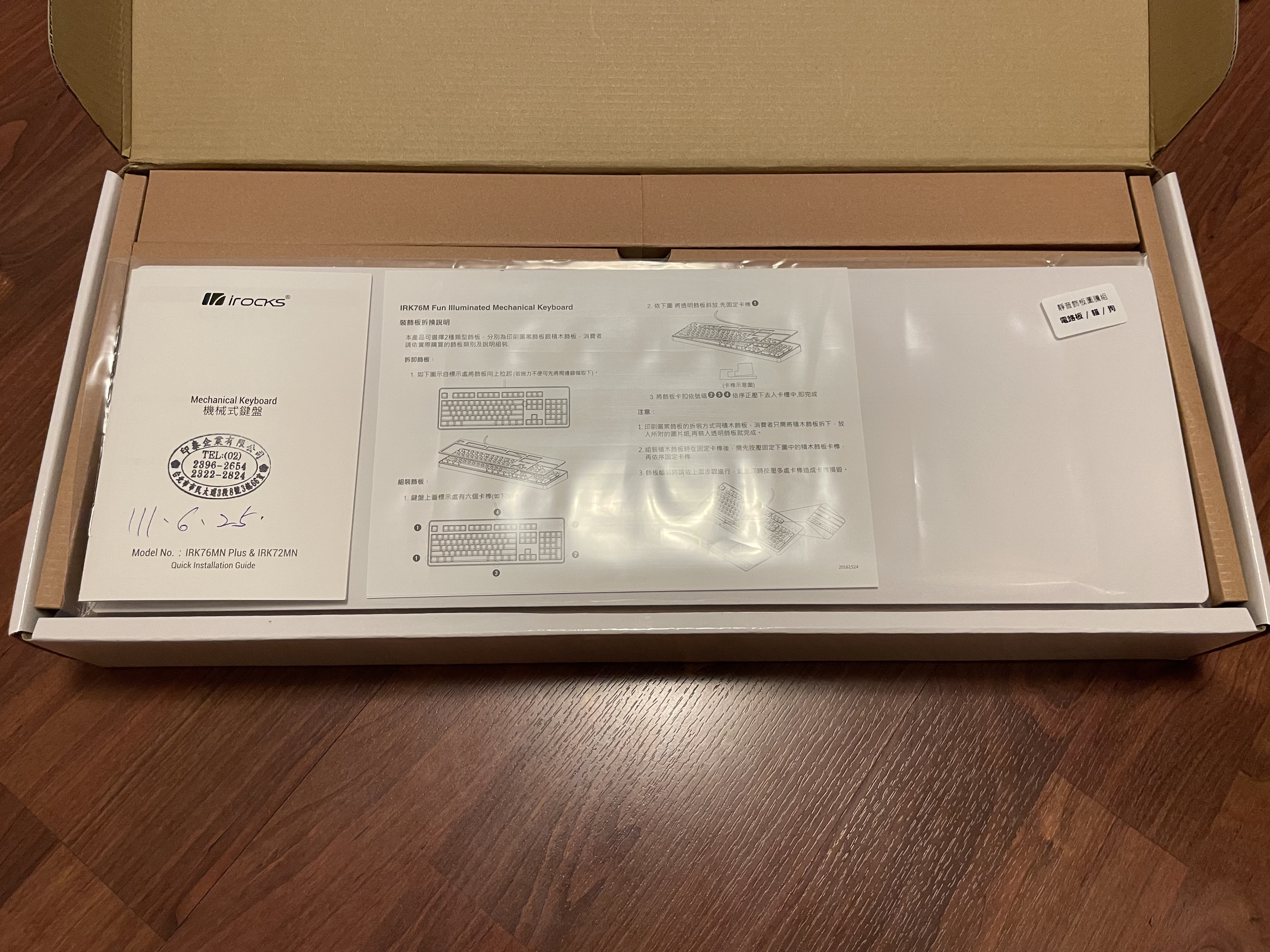 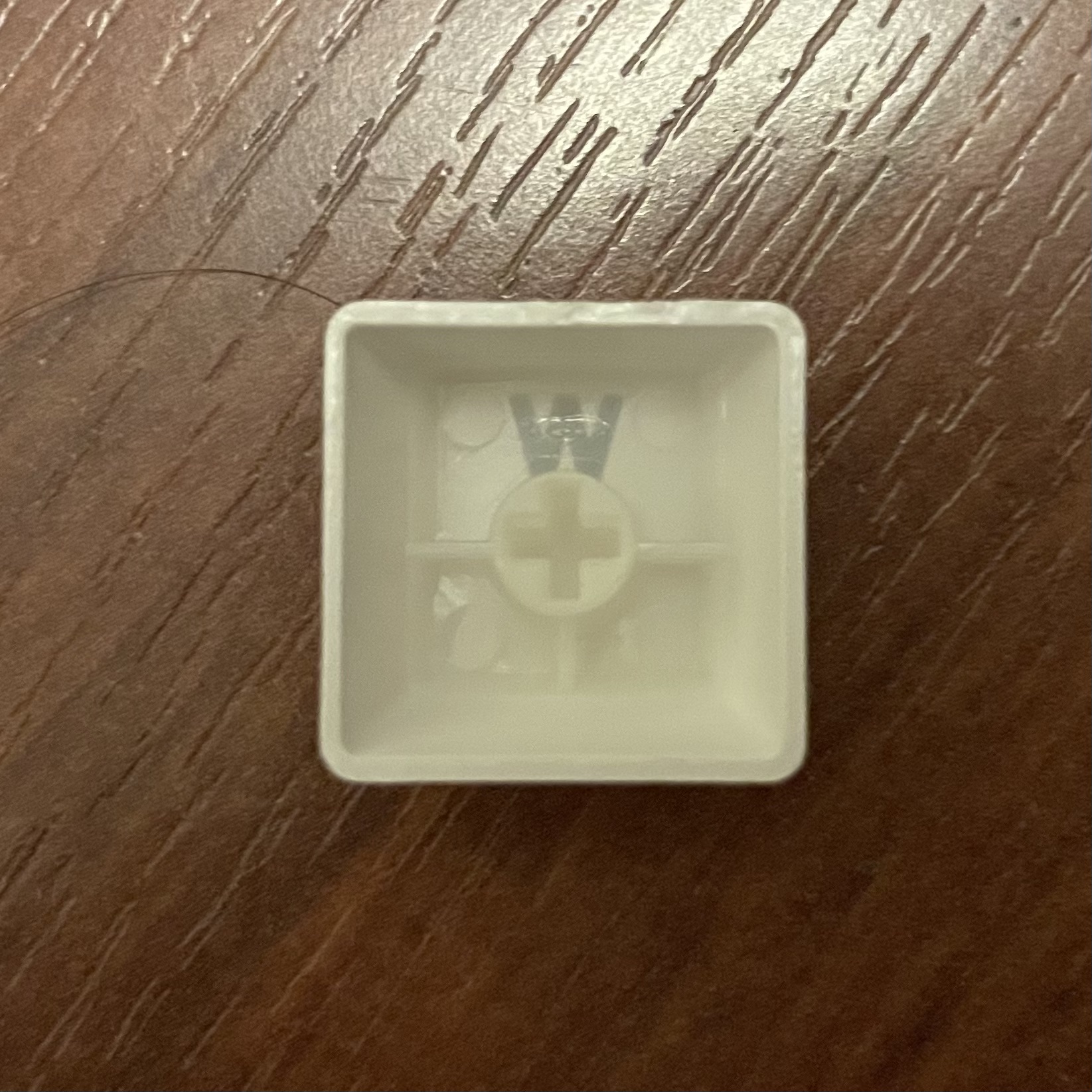 The keycaps are doubleshots; standard sort of cheap PBT/ABS inner-shot type keycaps. The Cangjie and Zhuyin sublegends are lasered onto the keytops. 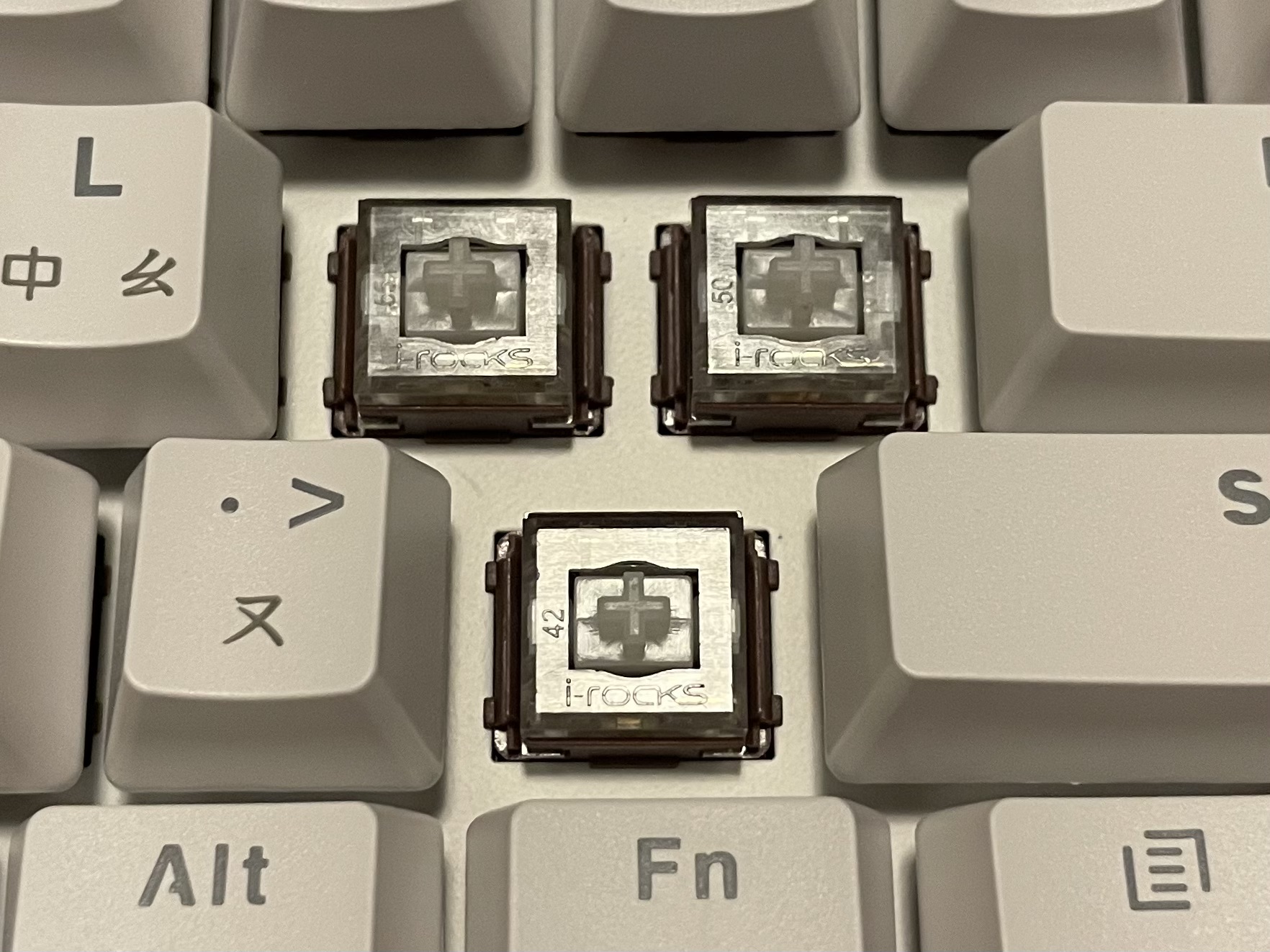 Now, perhaps the most interesting part of the keyboard: the switches. i-Rocks switches are extremely intriguing as both an Alps-style switch and an MX mount switch. They are plate incompatible with Alps by less than a millimetre as well as Cherry MX; 15.8 × 13.4 mm according to ai03's plate generator, and confirmed by Mandarbmax's tests with samples. They are PCB-incompatible with Alps or Cherry MX because of the centre pole requiring a hole in the PCB, but the layout of the pins is Alps compatible. They fit MX/Alps hybrid PCBs and somewhat tightly in hybrid plates. They are indeed Alps pinout, and the i-Rocks keyboard even fits Alps switches. 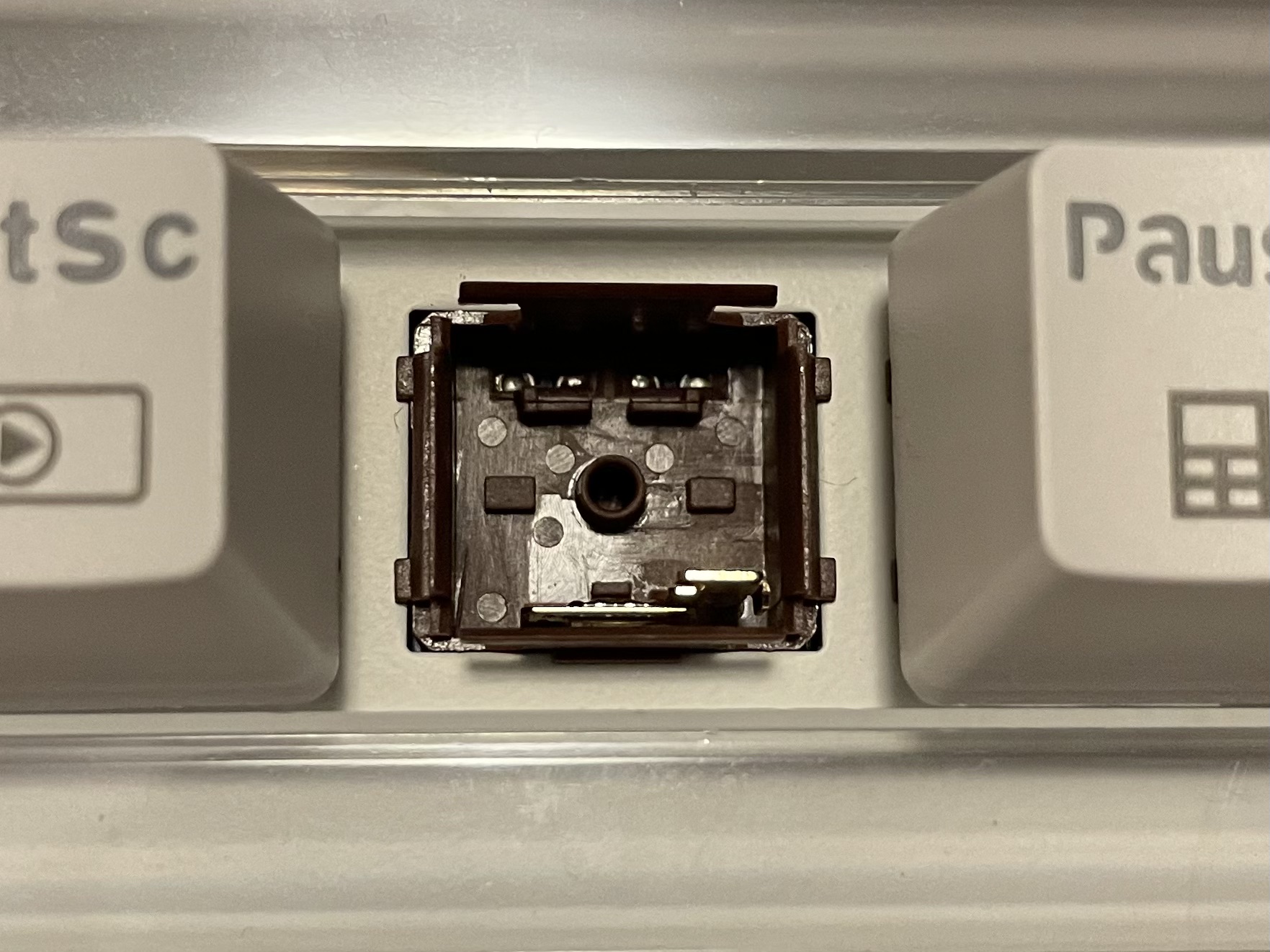 Of note is the spacebar switch - visually, the slider is a cream/ivory colour instead of a translucent white, and internally the spring is heavier than the rest of the board's switches. 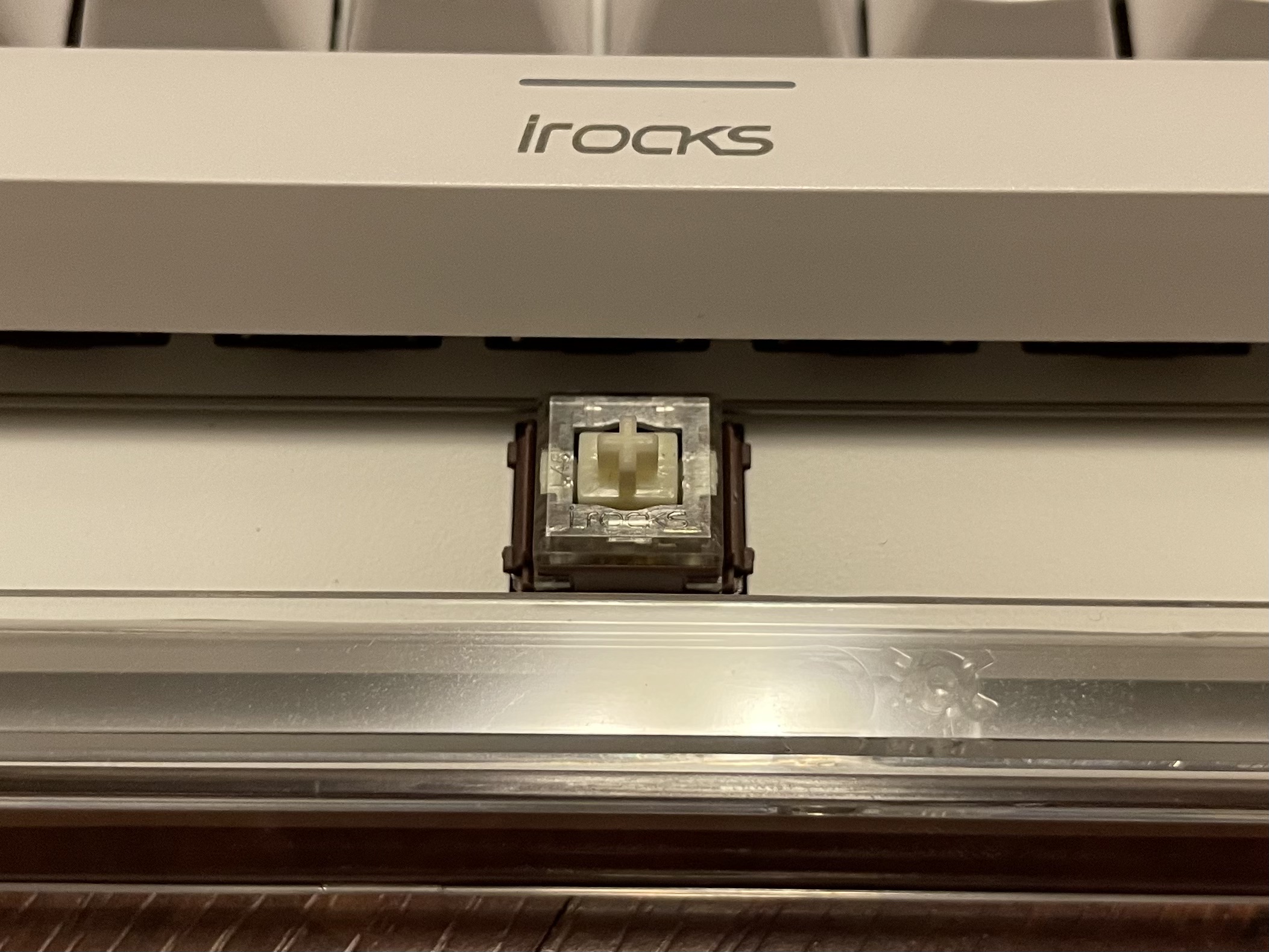 I bought the keyboard with 煉 'Refined' brown housing switches; the damped tactiles. The other two variants are the red damped linear, 逸 'Relaxed' and blue damped clicky 韻 'Rhythmic'.

Two additional versions were once available; i-Rocks' website has since removed references to them and internet archives are either lacking photos or too late. One is concretely documented: the white damped linear 詭/絕 'Sneaky/Strange'. The Deskthority wiki (by no means an accurate resource) lists one more, the dark-blue-housing 重青 'Dark-blue'. 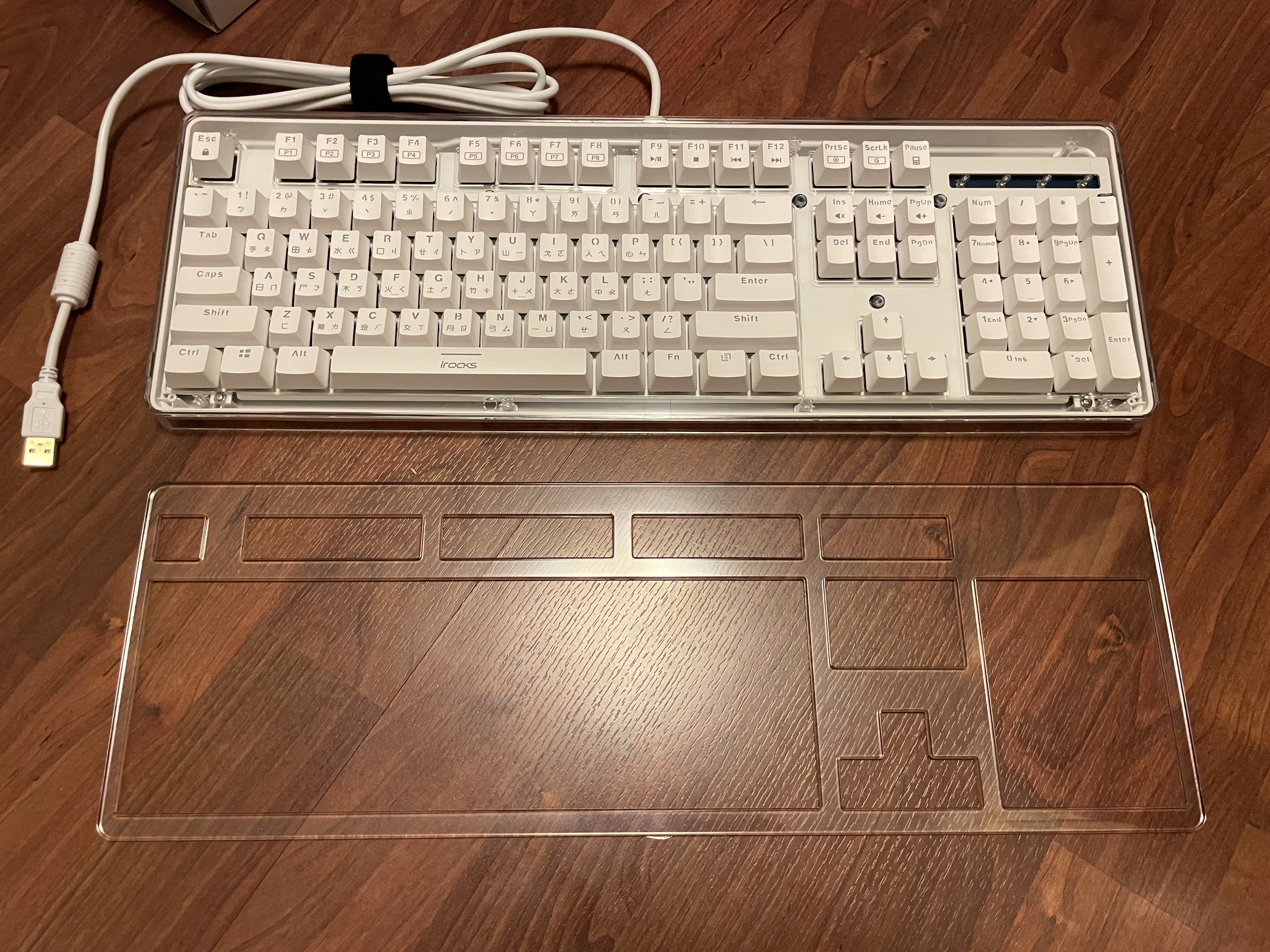 The K76M family of keyboards has a feature in common with the R3 Realforces: a removable top plate. On the K76M Custom (my board) and K76M Plus, the top cover is clear which allows the user to use sheets underneath it to customize the look. On mine, I just removed the sheet because I like the look without it. I think it's a neat, if not entirely practical, feature. On the K76M Fun (also labelled as the K76M RGB on their site).

I love these switches. They feel very similar to Matias Quiet Clicks (even that distinct secondary contact bump) and have that nice damped switch sound. They even feel less mushy. These switches would probably appeal to very certain people; people that like SKCM Ivory and Matias Quiet Click would probably find these very enjoyable. But: off-centre presses have a slight powdery-ness to them, and who knows how they'll feel after long-term use. I rate these 4.5 click leaves out of 5 verbose Deskthority forum members.

The board is fairly understated in its design, and I like it. The caps are the worst part; they don't look the greatest because of the way the plastic is shot without enclosed spaces in the letters, but they're functional.

Chyrosran22's video on the 韻 blue-housing switches, timestamped at 4:41
This video depicts the switches in an MX/Alps plate, which is what my conjecture is based on.

alps.tw's comparison of multiple Alps and Alps-clone components
Documented in this article is a type 'T9' clone with an extremely similar contact mechanism to those of the i-Rocks. Because the image has since ceased to be hosted there, here it is.

Translations for Mandarin switch names always seem to be rather hard to do because they are one word without context (though in this case I have context in the form of a COOL3C article); I've tried my best here:

The article on COOL3C by Mesak with a section on i-Rocks switch names and the rationale behind them, including the blue 韻 and the white 詭 switches.


⇦ Back to Keyboards